A former furniture store in Vernon Hills could be repurposed as an adventure center for kids.

Village officials have approved the concept for an Urban Air Adventure Park at 413 N. Milwaukee Ave. in the Marketplace shopping center.

The 60,551-square-foot space was occupied last by Ashley Homestore, which moved elsewhere in town several years ago.

Urban Air Adventure Park is a franchise with 153 locations in the U.S. and Canada and 80 more in development. Suburban locations include stores in Crystal Lake, Naperville and St. Charles.

The business has evolved from a trampoline park to include a range of attractions including go-karts, rock walls, rope courses, foam pits, climbing walls, laser tag, zip lines and other activities.

The target market is children ages 5 to 15, and the facility would include a protected area for kids 7 and younger.

There are 45,000 children in the market territory, which extends in all directions well beyond Vernon Hills, according to information provided to the village.

“The main thing we like about Urban Air is it gives a place for children to escape,” said potential operator Neil Hoffner, a St. Louis-area resident who said he is retiring this week after 18 years as a project engineer with Boeing.

Hoffner and his wife, Linh, operate a preschool/day care facility in the St. Louis area. They would lease the former Ashley space in Vernon Hills.

According to company materials, many franchise owners have backgrounds in children-centric businesses and can use those skills to diversify into child entertainment.

Hoffner said he has family in Lake County, including a brother-in-law who works in Vernon Hills and sold him on moving to the area.

Because the building is more than 45,000 square feet, it qualifies as an Urban Air franchise to offer premium attractions, such as go-karts or laser tag, Hoffner told village officials. It would be different from a nearby Sky Zone trampoline park, he added.

“I think the premium attractions will differentiate us from them,” he said.

One of the building requirements is a ceiling height of at least 18 feet to allow for zip lines and climbing ropes, for example.

Village officials said they wanted to ensure there was independent oversight of the equipment for safety.

“We’re going to be investigating that — what third-party inspection agencies are out there that handle those types of things,” said Mike Atkinson, community development director.

Village officials approved the concept for more detailed staff review and a public hearing before the advisory planning and zoning commission. Village code requires a special-use permit for amusement/recreational facilities.

“It’s seems interesting,” Atkinson said. “Now that we know the (village) board is open to it, we’ll dig into the details.”

Sun May 8 , 2022
Get used to road construction, Des Moines.  This year, the city is spending $100 million on street, sewer and bridge work, a record-high investment thanks in part to the 1-cent local option sales passed in 2019.  And the level of investment will remain high for construction seasons to come. Before voters approved […] 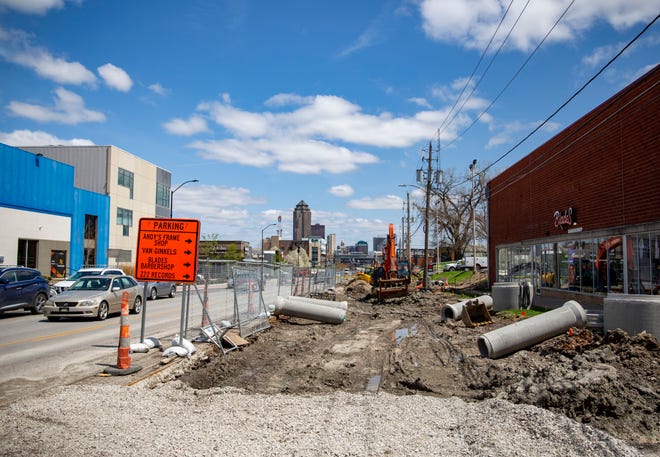