A Colorado-based company may proceed with its ground-penetrating, pre-construction activities for a $400 million grain elevator it plans to build in a rural, majority Black area in St. John the Baptist Parish, a judge ruled Friday.

Judge J. Sterling Snowdy, of the 40th Judicial District Court in LaPlace, allowed the company, Greenfield Louisiana, LLC, to commence pre-construction activities as a lawsuit currently before the court – in which a pair of St. John residents, twin sisters Jo and Joy Banner, have asked the court to nullify a 32-year-old ordinance that allows for heavy industrial use on a tract of land in Wallace, Louisiana – continues.

The Banner sisters head the St. John nonprofit group the Descendants Project — which advocates on behalf of the descendants of people once enslaved in Louisiana’s River Parishes. Group members believe the Greenfield site likely contains unmarked graves used for enslaved people who worked at nearby plantations. In court filings, Greenfield contends that it has found no evidence of graves on the land.

At stake are the health, wealth and cultural landmarks of the residents of Wallace, all of which are at risk, the plaintiffs argue, because of the 1990 zoning change, which was enacted as part of a corrupt scheme, according to the lawsuit against St. John the Baptist Parish.

“Obviously we’re disappointed in the ruling,” Pam Spees, senior staff attorney at the Center For Constitutional Rights who’s helping to represent the Descendants Project told The Lens. “This insistence that we should be able to show where a gravesite is in order to prevent harm” is unreasonable, she said, adding that the institution of slavery itself prevents the plaintiffs knowing exactly where the gravsites are located.

Greenfield bought the tract of land at issue in 2021 for $40 million. The company planned to build an enormous grain elevator on the property that would have included 54 grain silos and a conveyor belt. The Descendants Project sued the parish – located in the corridor along the Mississippi River Baton Rouge and New Orleans referred to as “Cancer Alley” because of its high levels of industrial pollution —  in November in order to nullify the zoning ordinance upon which the construction would rely.

Greenfield, which intervened in the case, and the St. John Parish government asked the judge to dismiss the suit, arguing the residents lacked cause to file it. But Snowdy ruled in late April that the suit can move forward. Greenfield later notified the court it planned to appeal that ruling to the Louisiana 5th Circuit Court of Appeal.

After Snowdy issued the April ruling, Greenfield notified some residents of Wallace that the company would conduct ground-penetrating, pre-construction activities on the site, according to court documents. In response, the residents last month filed a temporary restraining order and preliminary injunction in order to prevent, as they characterized it, irreparable harm they would suffer through the potential damage to their enslaved ancestors’ gravesites.

Greenfield objected to the injunction, arguing that its activities are outside the scope of the litigation — as the plaintiffs didn’t name the company in their suit — and that they have failed to provide conclusive evidence that slaves’ unmarked gravesites exist on the property.

“Indeed, Greenfield already conducted the very same ground-penetrating activities in the very same location and did not encounter any evidence of unmarked burial grounds,” attorneys for Greenfield wrote in a late May court filing opposing the injunction. The company also stated that it would cease activities on the site and notify governmental authorities if it discovers cultural resources, including burial sites, on the property.

But the plaintiffs note that three plantations — the Horn, Mialaret, and Whitney Plantations — operated on the site where Greenfield plans to construct its grain elevator, the residents said, and the enslaved people living there didn’t have the luxury of choosing, marking or recording their own gravesites. The Descendants Project say that experts on the history of the area believe it is likely that unmarked gravesites for the enslaved people who worked on those plantations exist on the property in question, according to court documents.

That assessment was buttressed by the account, r​​eported by ProPublica and cited by the residents, of a former employee-turned-whistleblower at the archaeological consulting company Greenfield solicited to survey the land, who apparently resigned in protest after her concerns that construction would disrupt historic sites – including potentially unmarked graves – were diluted and contradicted in the company’s report to the Louisiana Division of Archaeology,

Siding with Greenfield, Snowdy ruled Friday that the company may proceed with its pre-construction activity as the suit continues.

“The court’s decision is a win for the people of the Parish who will benefit from the jobs, opportunity, engagement and revenue that Greenfield will bring to the community,” Louis E. Buatt, legal counsel for Greenfield, told The Lens. “This was just another procedural attempt by a vocal few to hold up a project that is anticipated to have immense benefit to the community.”

The residents of Wallace have lived in fear that the grain elevator would cast a shadow – literally and figuratively – over their lives, according to the lawsuit. The adverse health, environmental, and economic effects of the construction would be devastating for Wallace, which relies on revenue from tourism, hospitality and the film industries, Jo Banner, co-founder of the Descendants Project, told The Lens.

As the residents pointed out in their lawsuit, the Occupational Safety and Health Administration has warned that grain elevators are hazardous environments for workers, in which fires and explosions caused by grain dust accumulation can occur. The Center For Disease Control has also warned that people who are exposed to grain dust may develop respiratory conditions such as asthma.

For Banner, this case is not about local residents somehow standing in the way of industrial progress that would benefit the region economically, she told The Lens on Thursday. Instead, it’s the area’s historical appeal that drives its economic prospects, she said. The Whitney plantation and museum, for instance, welcomed 100,000 visitors annually before the pandemic, according to the plaintiffs.

“We have opportunity; history is opportunity,” she said. “The whole myth that either we love our history or we have jobs, we can’t have both – that’s just a lie.”

Meanwhile, the Tulane Environmental Law Clinic sent a letter to William Nethery of the Army Corps of Engineers on Friday, asking the Corps to prevent Greenfield from beginning construction activity until it’s received permits and authorizations.

“The St. John residents are alarmed that Greenfield has represented to the community that it will begin piledriving work at the site, when the applicant has no permits or authorization from the U.S. Army Corps of Engineers, the consultation process under the National Historic Preservation Act has barely begun, and numerous significant concerns about the project’s impact on cultural resources such as underground burial sites have been raised,” Lisa Jordan, director of the law clinic, said in the letter.

Counsel for Greenfield said during Friday’s hearing that pre-construction activity may begin as early as Monday.

The judge’s decision to deny the injunction is just a temporary setback for the plaintiffs, Banner told The Lens. The Descendants Project ultimately wants Snowdy to nullify Ordinance 90-27 – which rezoned the tract of land at issue in the Greenfield case as industrial –   given the highly corrupt nature in which it went into effect more than three decades ago, in 1990, the residents have argued.

A federal jury determined in 1996 that former St. John the Baptist Parish President Lester Millet, Jr. engaged in an extortion and money-laundering scheme when he helped shepherd through the controversial ordinance, which would have allowed a Tawainese company, Formosa Plastics, to build a factory on the same tract of land at issue in the Greenfield case. Even though Millet was sentenced to almost five years in jail for his actions and the Formosa plant was never built, the ordinance —which rezoned the area and allowed industrial sites to be located up to 300 feet away from residential zones — remains on the parish’s books.

Greenfield’s pre-construction efforts, which the company engaged in last year, have already  exerted an emotional and psychological toll on the residents of Wallace, Banner told The Lens.

Hearing the repeated hammering of pile drivers into the ground – all the while knowing there’s every likelihood the unmarked graves of their enslaved ancestors are present on the property– has been traumatic, Banner said.

“We were in tears because it was such a terrible, stressful thing to go through,” Banner said. “Knowing that we have anomalies for burial grounds there, most likely, and they’re just banging, banging, banging into the ground – it was psychological warfare.”

Mon Jun 6 , 2022
Buddy Schum has been awarded for the arresting design elements of his house remodels in Bucks County, and Carbon County PA. In the following article Buddy Schum explains what should be prioritized for maximizing returns on a flip or remodeling project. Whether it’s purchasing a fix-and-flip for profit, or a […] 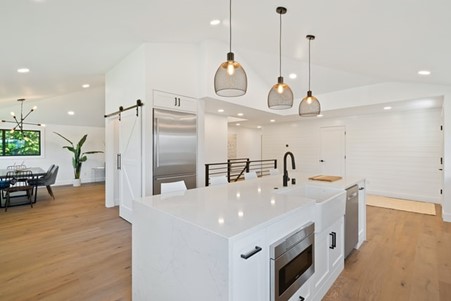