Skip to content
We want to help you make more informed decisions. Some links on this page — clearly marked — may take you to a partner website and may result in us earning a referral commission. For more information, see How We Make Money.

When the monthly rent for Cristiana Peña’s Brooklyn apartment went up $200 this year, she and her partner decided to get serious about finding a place to buy.

But that wasn’t as simple as picking a house, any house. Peña, who has worked in historical preservation, wanted something distinctive. So they found a property in upstate New York – an old church waiting to be turned into a home.

“We could’ve bought a house years ago, months ago, we could’ve closed on something, even just your conventional old house a long time ago, but we were really looking for something different and unique,” she says.

It makes sense that Peña would want an inexpensive home – she works for “Cheap Old Houses”, which collects and shares listings of bargain-priced homes around the country through Instagram, newsletters, and an HGTV show.

By making that home decision, Peña is also finding a way to obtain a home at a reasonable price in what seems like an ever more unreasonable housing market. Home prices are up about 20% from where they were just a year ago, and they show few signs of coming down soon. That leaves potential buyers, who don’t want to be half a million dollars or so in debt, with a shrinking number of options. It just takes a little creativity, and maybe some elbow grease.

“No matter the economy, no matter the zeitgeist of the country, it’s always a good idea to buy beneath your means,” says Elizabeth Finkelstein, who founded “Cheap Old Houses” alongside her husband Ethan.

Here are some things experts want you to think about before you consider dropping less than expected on a house.

Why Consider a Cheap Old House?

A cheap old house can significantly cut your housing costs. Peña said their rent is currently about $2,300 a month. The monthly mortgage payment on the church, with a sale price of $100,000, will be closer to $300 or $350. “That difference is the money that we’re going to then have as our renovation budget,” Peña says.

Most homes on the market won’t come with payments that low. Home prices are up 20% or so year-over-year. The average 30-year fixed mortgage rate, meanwhile, has risen two percentage points since the start of the year. There are a lot of strategies for homebuyers to consider when facing those simultaneous forces hindering home affordability.

Experts suggest you should shop around for a mortgage and be patient with your home search. But you also need to be creative. Maybe an old fixer-upper or a community that isn’t a hot housing market might be worth considering.

“This is basically house hacking 101,” Ethan Finkelstein says. “We are trying to think of different ways to afford the same American Dream that everyone is fighting after.”

Whether an older house is even much of an option depends on where you’re looking for a home. You’re more likely to find them in older cities, particularly the industrial Midwest and Mid-Atlantic. More than 80% of homes for sale in Detroit and Baltimore were built more than 50 years ago, according to a study by the real estate research firm Point2, along with more than 70% of homes in Milwaukee, Philadelphia, and the California cities Oakland and Long Beach. Cities in the Sun Belt and the West are more likely to have the highest share of homes built in the past decade, with El Paso, Texas, and Oklahoma City, Oklahoma, leading the way.

The fact that a lot of these houses are in areas that haven’t seen hot real estate markets often means many of the houses have older features and decor, which can have its own appeal, Elizabeth Finkelstein says. “In some of these places where the real estate is much cheaper, because there isn’t as much wealth constantly pouring into them, the houses have remained these little time capsules,” she says.

An Older House Might Need A Lot Of Work

The Finkelsteins bought their own cheap old house, without a mortgage, in upstate New York last year. The old farmhouse on more than 10 acres cost them $71,000, but “it was in a horrible state when we bought it,” Elizabeth Finkelstein says. That includes foundation work and restoring the siding on the farmhouse, along with rebuilding a barn with reclaimed materials, at a cost of about $30,000.

If you decide to go the cheap old house route, take this advice with you:

Worry First About the Foundation

The foundation can be the biggest problem with older homes, says Karen Richmond, a Portland design consultant with the firm Neil Kelly. On the West Coast, she says, a lot of homes built before the 1920s have foundations built using unwashed sand, which can cause problems after decades. Foundation work can range from mildly expensive structural reinforcements to the far more expensive prospect of lifting the house up and replacing the foundation – a repair that can run toward six figures. “If the house is worth it, that can be quite a benefit, actually,” Richmond says. “Not only ensuring your house stands a lot longer, you can also make the basement taller and more usable.”

When looking at houses, keep an eye out for floors that are very unlevel and basement water issues to identify potential foundation concerns, Richmond says. “If there are big cracks, buyer beware.”

Get a thorough home inspection if you’re looking at an older home. And if major repairs are expected, find a contractor you trust who has the same vision you do for the home, and bring them in early.

Other issues that could be serious expenses include the electrical, plumbing, furnace and HVAC systems, and the roof, Richmond says. All of those things can be identified in a home inspection, which is important no matter what type of house you’re buying, but even more important if you expect some things not to be perfect just yet. Beyond a home inspection, you can also tour the home with a contractor who works on restoring older homes. (Experts say choose a contractor with the same vision you have for the home: If you want an older home repaired but not completely replaced with new materials, get a contractor who wants to do that work.)

Once you’re aware of what problems a home might have, take your time, build a budget and plan for it to take a while, Richmond says. “Don’t be daunted by the potential of a big project,” she says. “Yes, it takes money and time, but it can be very rewarding when it’s done.”

For the Finkelsteins, the work on the property means it will cost a good bit more than $71,000 in the long run, but when finished it might be worth a lot more. Besides, working on fixing up their farmhouse is one of the reasons they chose it. “We live in a digital age and we’re just pushing pixels around all day,” Elizabeth Finkelstein says. “When you work on these properties you feel something different, you can see the tangible results of it. There’s something truly satisfying about that.”

An Older House May Not Need Major Work

Lise Hanley, another member of the “Cheap Old Houses” team, bought her cheap old house in Detroit. She moved from a $650 per month studio apartment to a 1,500-square-foot home that cost $78,000.

It still has the bathroom from the 1960s, creaky floors, and a few other issues, but nothing major like what the Finkelsteins faced. “It does need a new roof, and plaster is crumbling in some parts, but I don’t have to fix those right now,” Hanley says.

Some things that look rough might not be major expenses. Cosmetic issues like peeling paint and bad flooring are relatively cheap and easy to fix, at least compared to the price surcharge you’d see if you considered an immaculate house, Richmond says. Countertops and cabinets are a bit more expensive, but still not too pricey compared to a full kitchen or bathroom remodel, she says.

If you’ve got repairs or renovations in mind, be aware that both materials and labor have gotten more expensive in recent years. “There’s just a big demand right now. Any time there’s a demand, labor costs do go up,” Richmond says.

The Finkelsteins say spending less on a house, and embracing the character of something that’s stood for decades, has its own value for your peace of mind.

“Knowing that you don’t have that mortgage facing you every single month and that you didn’t have to break the bank and eat peanut butter and jelly for three years because you spent too much on closing when you’re already saddled with student loan debt and car payments and all these other things that we’re told in this country that you’re supposed to take on as part of your normal life,” Elizabeth Finkelstein says, “that will feel so good, in my estimation, that you can live with a drafty front door for a little while.”

The Best Handyman Services of 2022

Wed May 18 , 2022
Photo: istockphoto.com Those who own a home know that they require various repairs, upgrades, and maintenance. While there’s occasionally a spare weekend to tackle some of these jobs on your own, that honey-do list can quickly grow out of control. Sometimes the best option is to turn those jobs over […] 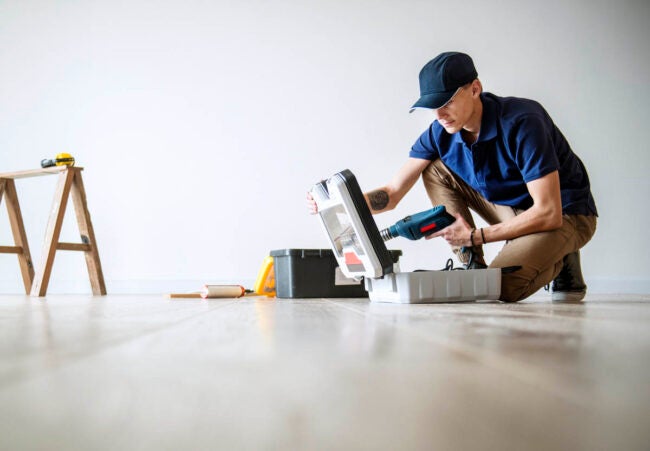