Say what you will about engineer, permit expediter and accused federal criminal Rodrigo Santos, but the man has range. His alleged misdeeds span from the abstract to the concrete.

Or, rather, through the concrete: The City Attorney has accused him of using forged permits to undertake risky excavations that could’ve gotten somebody killed, and purportedly did undermine the homes of not only Santos’ clients, but also their neighbors’. The Feds have also accused him of orchestrating a bribery scheme, and both the City Attorney and Feds have accused Santos of stealing hundreds of thousands of dollars from his clients, bit by bit, via check fraud.

So, that’s reality. But the latest Santos news involves a voyage into the world of illusions. And toilets are involved.

In October, 2020, Santos filled out a pair of permit applications for his client, building owner Tony Gundogdu. The permits called for bathroom remodels “in kind” for six units at Gundogdu’s property at 311 11th Ave., a rare single-room occupancy hotel in the Richmond District.

Department of Building Inspection jargon is often impenetrable, but this isn’t: “in kind” means this is the most straightforward type of work, the replacement of existing items with like items. “No structural changes. No changes to layout,” Santos wrote on the forms. Both Santos and Gundogdu signed their names.

So, this was portrayed as the most innocuous, nothing-to-see-here type of remodel imaginable. And these permits were approved. But the problem was that there was nothing to see here. As in: There were no bathrooms to remodel.

This building dates to 1910, and has been known as “the Elite Hotel” for generations. Its residents tend to be older, and many have lived here for quite some time. Thirty-plus-year resident Bob O’Brien remembers a long-ago landlord keeping the rents purposefully low to help people out, and fostering a real sense of community.

Under Gundogdu, who bought the building in 2017, that’s not the case. The property manager, O’Brien says, hasn’t returned any of his emails about safety conditions on-site for nearly five years. O’Brien has become inured to loud, intrusive and even unsafe-looking construction here. But, like other residents we spoke to, he couldn’t help but notice bathrooms going into rooms where, previously, there weren’t any.

The 13 or so dwellers here share two communal restrooms, as you’d expect in an SRO. But, in the two vacant units some residents still refer to as Jack or Marianne’s room — those two have since died — work was being done to install not only new bathrooms but a kitchen unit. A bathroom was also being built in a formerly communal storage area.

“I just accepted it. I was tired of complaining at that point,” O’Brien said, regarding the 2020-21 construction. “But, fortunately, someone else did complain.”

Department of Building Inspection personnel were on-scene by February, 2021, and they realized they’d been had. Work was shut down and the permits to remodel the imaginary toilets were subsequently revoked. The revocation notice from DBI director Patrick O’Riordan rather politely described the information on Santos and Gundogdu’s paperwork as “erroneous.”

Neither Santos nor Gundogdu returned our messages. So we didn’t get to ask them, point blank, what the game was here.

But it’s very hard to argue that they both didn’t know there were no bathrooms in Rooms 1, 2, 3, 5, 7 and 9, which they applied to “remodel in-kind.” You’d know that from looking at plans, walking through the single-room occupancy hotel, and seeing the two extant shared bathrooms (which are, again, what you’d expect in an SRO).

More to the point: You probably know how many bathrooms there are in your home. Or, at the very least, how many there aren’t.

So, it’s very hard to argue that the game at 311 11th Ave. wasn’t to juke the value and appeal of an aging SRO by installing ensuite bathrooms in rooms where there were none, and to attract the sort of resident who wouldn’t want to live in an SRO and share a bathroom.  O’Brien and the dozen other aging residents can see what’s what.

“I feel like I’m being pushed out and my rights trampled on,” he said. “I feel like we don’t matter to them. What matters to them is, capitalizing on this property.”

Gundogdu, who has had troublesome issues as a landlord in other cities, too, bought this building in 2017 for $4.2 million. It is now listed for $6.95 million. (“15 SRO units and one apartment unit … Development potential to convert the property to a 6 story building with 41 residential units plus retail.”).

This city’s Department of Building Inspection has come in for its fair share of criticism. But it’s hard to find much to complain about regarding DBI’s comportment on this site. Much the opposite: DBI, along with the Planning Department and City Attorney, has been boots-on-the-ground here, and the tenants are thankful. DBI inspectors have hit 311 11th Ave. with eight Notices of Violation since 2020 alone; if they left any more postings on the building’s front door that, in itself, might constitute a violation regarding the overburdening of that door’s carrying capacity.

So, this isn’t another story about city ineptitude or corruption. City agencies have done well here. Rather, this is a story about just how many chances this city gives even its worst actors to receive both forgiveness and permission, retroactively.

Official city documents avoid using the terms “lie” or “lying” to describe Santos and Gundogdu’s provably false claims on the permit application. O’Riordan prudently wrote it was “erroneous.” Other communiques describe it as a “misrepresentation.” But it’s very hard to conjure up a scenario in which this isn’t a case of deliberate dishonesty.

If you pulled this kind of behavior at a private business, there would be consequences. You would probably be formally or informally barred from doing business with the people you attempted to fool (in writing).

But not with this city. The worst the city can do if it catches someone in a blatant lie on a form is file an “unfair competition” suit under the state business and profession code, with a maximum penalty of $2,500. If you catch someone lying, say, 100 times, legal action might survive a cost-benefit analysis. But not once. Not even multiple times.

And, until Santos’ engineering license is revoked by the state licensing body, he’s free to waltz into DBI headquarters on the regular (which he still does).

And, after it’s all said and done at 311 11th Ave., it appears the three illegally constructed bathrooms will be allowed to remain. That’s even with the city having a great deal of leverage here, because this building is an SRO: Under section 41 of the city’s administrative code, SRO room cannot easily be converted, demolished or removed. Installing unwarranted bathrooms or kitchens clearly runs afoul of that.

But Gondugdu owns other buildings that aren’t SROs, and don’t have such clear-cut protections. And he hired Santos to work there, too.

You probably don’t know the name Andrea Carla Michaels. But you might have heard of her alter ego, The Pizza Lady.

Michaels is that rare breed: A philanthropist who is not in the least wealthy. She has lived in the same rent-controlled unit at 1100 Leavenworth St. since 1993 and, for the last five or six years, has spent much of her time disbursing donated pizza and supplies to the area’s homeless denizens.

Gondugdu bought Michaels’ seven-unit building in 2016 for $2.7 million, and it hasn’t gone well. The Department of Building Inspection has hit him with 18 Notices of Violation since 2019 alone, Michaels is suing him for tenant harassment, and he is suing her for allegedly sabotaging his plan to sell the other units in the now nearly empty building for around $1 million a pop as a Tenancy-In-Common units.

Michaels scoffs at the notion that she single-handedly undermined the sale of the TICs; rather, she says, buyers just did their due diligence. But the Pizza Lady who fed the homeless is now worried about becoming homeless herself, at age 64. She says she’s aged 20 years in the last two.

Multiple current and former 1100 Leavenworth tenants have said that the response here to the frequent Notices of Violation DBI posted on the door was to rip them off and carry on with rampant unpermitted or over-scope construction, which started early and continued until late. To isolate just a few incidents in 2020 alone, building inspectors encountered unpermitted demolition in the basement, cavalier treatment of lead paint, and eventually demanded Gondugdu increase the valuation of the project by $450,000.

Santos was on-scene here frequently, too; he would open the door for city inspectors and, presumably, attempted to work his behind-the-scenes magic to remediate the site’s burgeoning violations. City officials told me that they were frustrated and angered that the landlord blew off habitability or life-safety matters here, but never ceased on the renovation of the empty units now being offered for sale.

Eventually, the city attorney intervened at this property. And fines were paid and codes were adhered to. It was an excruciating process. But, also, an unsatisfying one. The city can make sure that the rules are followed to a tee as buildings are upgraded — after the tenants have been dispersed.

Michaels tells me she’s grateful for the DBI housing and building inspectors. She notes that there’s a mediation session for her case vs. her landlord later this month. But, she says her lawyers tell her, even if she wins and gets to stay in her unit, and even if Gondugdu’s suit vs. her is dismissed, there’s nothing keeping him from suing her again. And again.

“All the cases are closed,” said a frustrated city observer regarding the city’s intervention at 1100 Leavenworth. “But the road to how the landlord got there is, to me, where the story is. This dude is emblematic of a larger problem. He sees San Francisco as a bank to come in and he can make a profit.

“And this is happening across the city. Because it’s lucrative. And there’s very little preventing folks from doing it.”

Tue May 10 , 2022
The conference room is perhaps the least loved space in the modern office. Typically long and narrow, with a rectangular table presided over by a boss at one end, it’s the place where countless workers have nodded off, shared eye rolls or sneaked peeks at cellphones held in their laps. […] 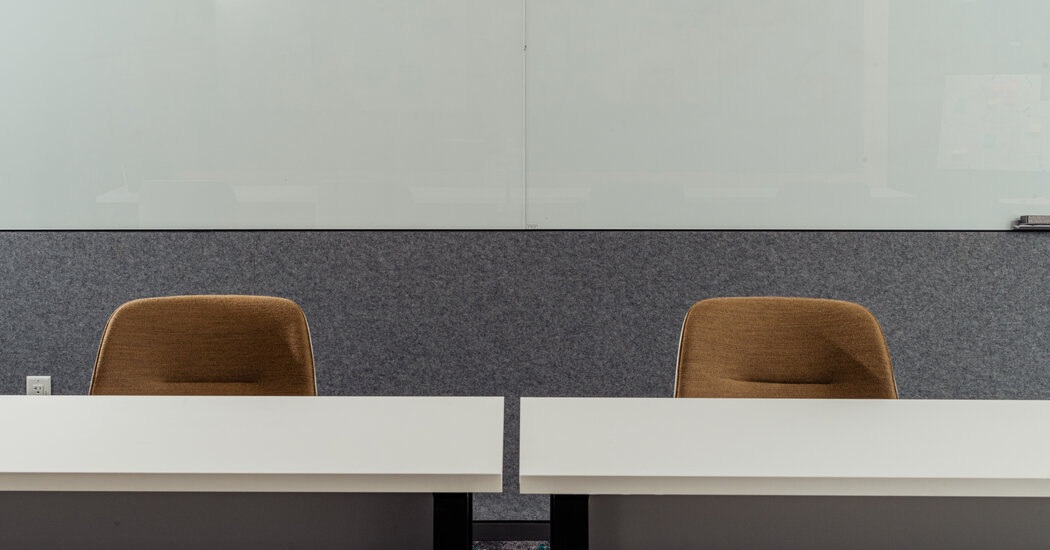